Ho-Chunk people cherished the landscape and resources of Teejop for centuries before Europeans arrived, and they continued to do so in the face of conquest, removal, and erasure. These documents offer a few glimpses of how Ho-Chunk people lived here, how they responded to the pressures of conquest and removal, and how they persisted. 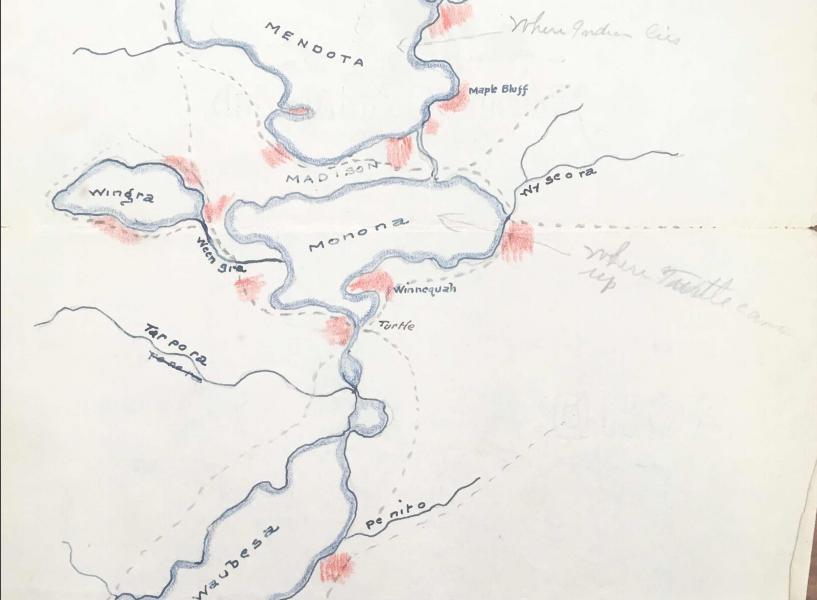 Map of Ho-Chunk villages and campsites in Teejop

The sites marked on this map reflects the importance of the Four Lakes region—in Ho-Chunk, “Teejop”—to Ho-Chunk social, cultural, and economic life. It is based on the archaeological survey work overseen by Charles E. Brown (1872-1946), who served as curator of the Wisconsin Historical Museum for most of the first half of the twentieth century.

By the time Europeans arrived in the region, Ho-Chunks generally lived in autonomous bands ranging in size from dozens to hundreds of people. These bands pursued a seasonal itinerary, following resources over the course of the year. The “camps and villages” marked here include sites (such as the one described below) where large groups hunted and fished as well as villages organized around the cultivation of corn. 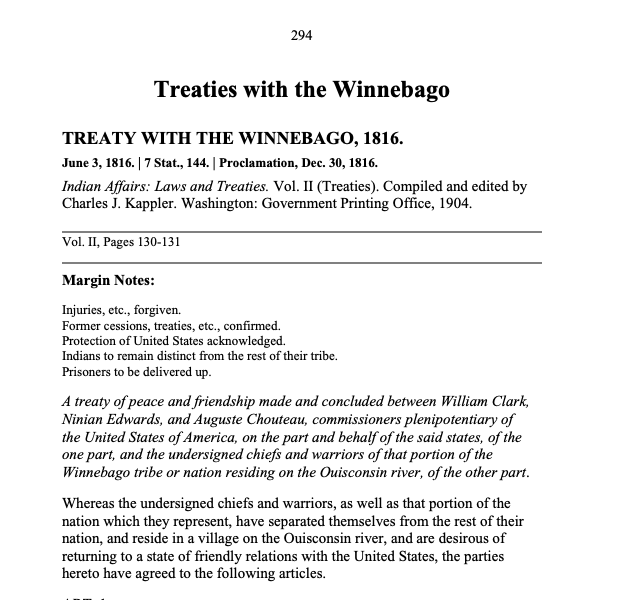 The Treaty of 1832, forced upon the Ho-Chunk in the immediate aftermath of the Black Hawk War, demanded the cession of a vast territory (see map in Lonetree), the second such transfer of land in just three years. Its terms consigned the Ho-Chunk to lands north of the Wisconsin River, with a view to their ultimate removal across the Mississippi. 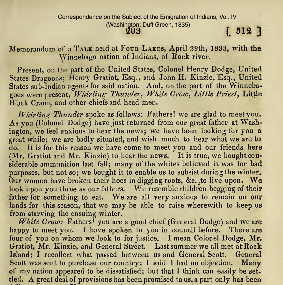 U.S. interpreters recorded this meeting near present-day Madison between Ho-Chunk and U.S. leaders in the spring of 1833, in the aftermath of the Black Hawk War and the Treaty of 1832. The exchanges reflect the Ho-Chunk band leaders’ awareness of their weak strategic position, but also their reluctance to abandon longstanding fields and hunting grounds. 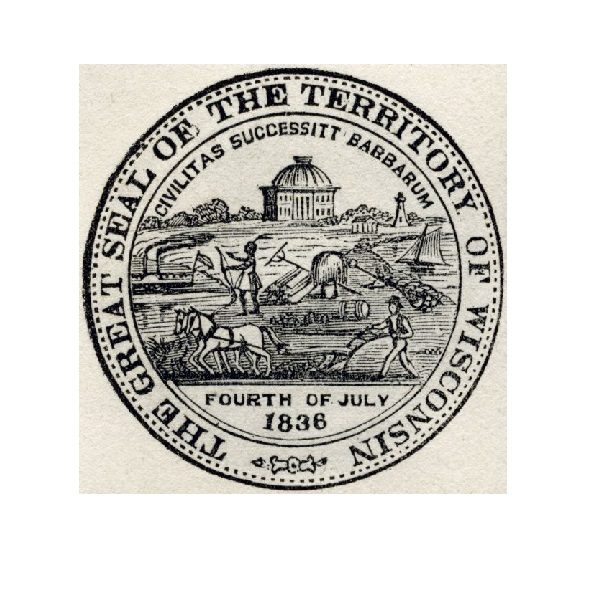 The second seal of the Wisconsin Territory, presented to the legislature in 1838, was meant to represent (in the words of the legislative committee that proposed it) “the pursuits of the citizens of the different parts of the Territory, mineral, agricultural, and commercial … by its symbols and expressive motto, Civilitas Successit Barbarum, holds up to view, in a strong light, the progress of civilization and the continual repress of ignorance and barbarism.” (See Thwaites, “Emblem and Sobriquet,” p. 299) The seal’s imagery and motto argued that Wisconsin’s development as a settler colony required the removal of the state’s Native population. 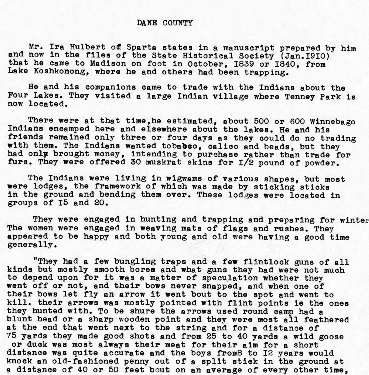 The Ho-Chunk village on Lake Mendota, ca. 1839, as observed by Ira Hurlbert

During the early twentieth century, as Charles Brown sought to create a complete survey of Wisconsin’s Native American archaeological sites, he also collected stories from elderly Wisconsin settlers about their early encounters with Native people. This account describes a large seasonal Ho-Chunk encampment at the site of today’s Tenney Park, where the Yahara River flows out of Lake Mendota and across the Isthmus. The lake’s level was then many feet lower, the river had not yet been channeled and straightened, and much of the area was a broad wetland. 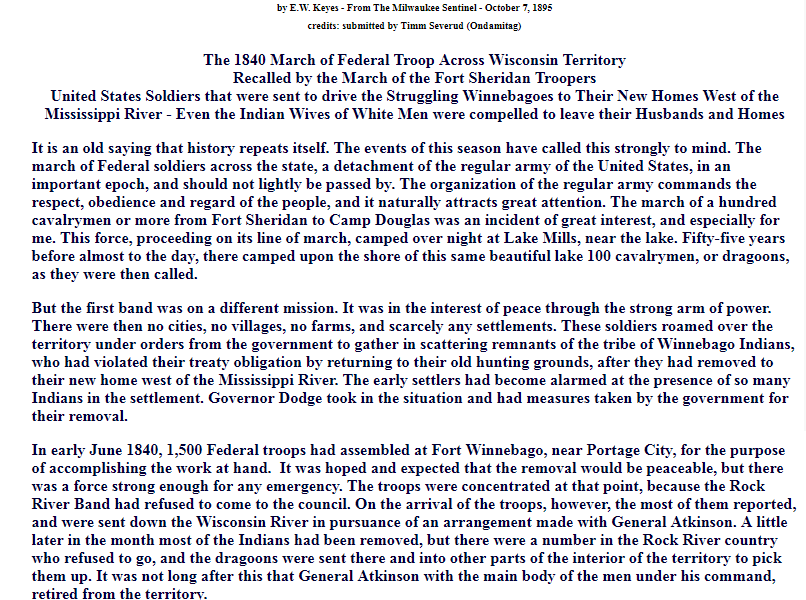 In 1837, five years after the Ho-Chunk were forced to cede their lands south of the Wisconsin River, the U.S. government demanded that they give up all their remaining Wisconsin lands and move west across the Mississippi. As in the years immediately following the 1832 treaty, Ho-Chunks resisted this removal, but in 1840 the U.S. mobilized troops to round up those who refused to comply. Ho-Chunks continued to resist, and many remained in or quickly returned to Wisconsin. But many were forced to abandon their homes.

Settler E. W. Keyes’ memory of this history, recorded more than a half-century later, captures another dynamic of the removal era: the rupture of the longstanding ties of marriage and kinship between European and Euro-American traders and their Ho-Chunk trading partners. 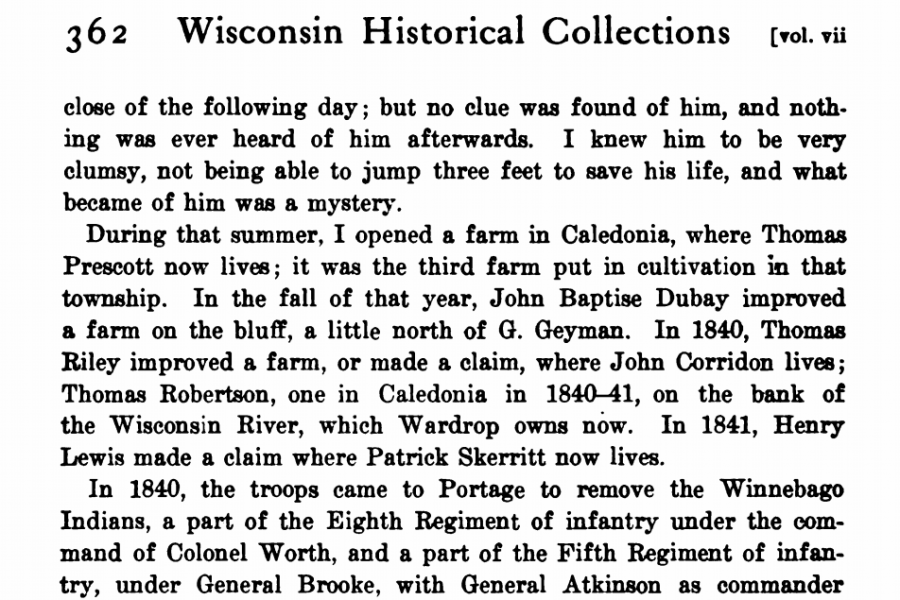 John T. De La Ronde (1802-1879), a French-born Canadian trader, spent much of his life in intimate association with Ho-Chunks in Wisconsin; his account of the 1840 removal reflects his greater understanding of and sympathy for them. It also details some of the tactics Ho-Chunk people used to delay or thwart the removal process. 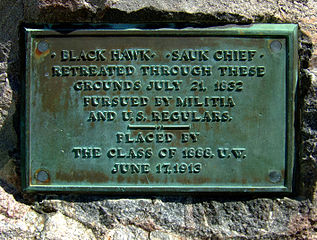 Ho-Chunk people continued to return to Teejop throughout the nineteenth century, living seasonally in a variety of lake- and river-side locations. By the late nineteenth century, however, most non-Native residents of the region—including member of the University of Wisconsin community—no longer saw this as part of their living history. Instead, they generally regarded Native people as relics of a distant past and as doomed to extinction. In this context, the class of 1888 marked their 25th anniversary with a plaque commemorating the only Native history they could imagine: a history of defeat which helped consolidate the conquest of North America and the dispossession of Native Americans. In the text of this 1913 marker, Teejop’s original inhabitants seem to disappear entirely.

But they were not gone. Ho-Chunk families continued to inhabit Teejop throughout this era, and the very next year the campus—with help from Charles Brown—would host the annual convention of the Society of American Indians, a gathering of Native intellectuals seeking a better future for the continent’s Native people.